Leading by misleading in the hummus economy 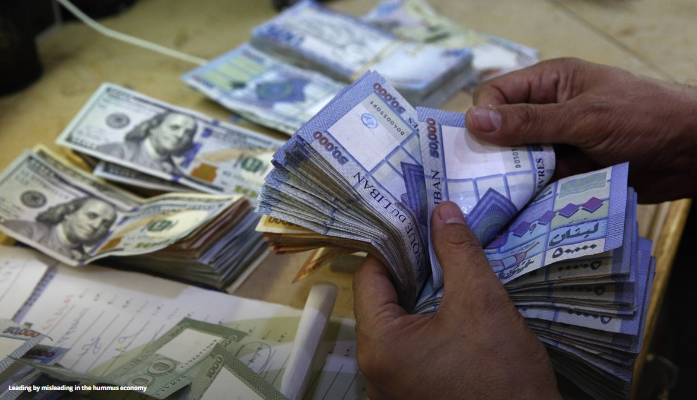 The Lebanese woke up to some simplistic statements by certain court economists and politicians about
an upcoming miraculous and salvaging boom triggered by improved exports and tourism. These
statements came at a time recession is accelerating and the country is heading towards the unknown.
With reference to the J-Curve economic theory and under specific circumstances, a country’s trade deficit
will initially worsen after the depreciation of its currency. The shape of the curve is directly correlated to
the elasticity of imports and exports.

To illustrate, consider a good that is imported as it has no
domestic producer. In case the demand is price inelastic, the
trade balance gets worse following a currency depreciation
unless a local substitute is produced.
In Lebanon, it is anticipated that the depreciation of the
Lebanese Lira will not positively impact exports in the short run

As per Mr Georges Nasrawi – Vice President of the Association of Lebanese Industrialists and Dean of
the Syndicate of Lebanese Food Industries – exports might have increased for some companies only. For
others, exports dramatically decreased due to the scarcity of raw material required in the production
process.
Manufacturers historically needed an average of USD 3 Billion in raw material for production purposes.
This need is far from being fulfilled due to the unofficial capital control and suppressive practices by the
Lebanese banks. The Central Bank of Lebanon (BDL) recently allocated USD 100 Million to enable
manufacturers to import raw material with a ceiling of USD 300,000 per manufacturer. However, the
process is intricate and it is not easily accessible to all. Meanwhile, some expatriates and Lebanese
industrials are joining forces to develop an international platform aiming at securing USD 750 Million to
allow the provision of raw material to Lebanese manufacturers.
Similarly, thinking that a rise in tourism would suddenly bring plenty of inflows to refresh and save the
Lebanese economy is quite naïve. The road to recovery has become long and steep.
The behavior of tourists has changed globally following the Covid-19 pandemic; many tourists will not be
willing to travel any time soon for reasons primarily related to health concerns in the absence of a vaccine
and to the increased cost of air-tickets (e.g. to compensate lower demand). In Lebanon, this comes along
uncertainty and fear amid political instability which might discourage certain tourists from choosing
Lebanon as a destination. Reviving Lebanon as a leading tourist country for foreigners and expatriates
requires compounded efforts that seem oversized in a country where infrastructure might not be able to
cater to tides of tourists.
Here is an illustrative example: one hummus platter was generally priced at LBP 7,000 (originally close to
USD 5). If the same platter is sold at LBP 14,000 which is already an inflated potential price in
comparison to current market price (LBP 8,000/USD), it would require almost three times more effort in
terms of production and turnover. How likely is Lebanon going to attract three times more tourists than
before?
Threats are coming from different directions towards Lebanon along a complex economic and political
situation that looks hopeless. Nevertheless, the resilient Lebanese youth and the Lebanese Diaspora

have an unprecedented opportunity to rebound the economy from its depression, replace the current
political class, and rethink Lebanon.