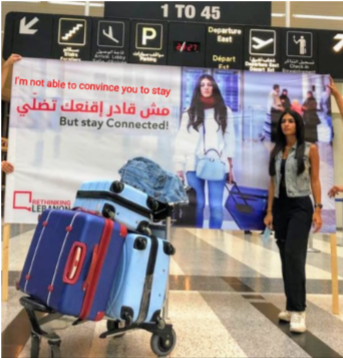 The brand of Lebanon has lost its value within the country and beyond its borders with a Diaspora exceeding three
times the size of the country’s population. The damage to the brand equity of Lebanon will also burden the youth
and forthcoming generations for years to come. The independent, qualified, and decent Lebanese youth must
lobby internationally to take charge of Lebanese politics and economy. It is no longer the rule of corruption,
wastatracy, and incompetence.

Most people who are either Lebanese or interested in Lebanese and Middle Eastern affairs believe that what the
Lebanese people lost the most is the value of the Lira 1 with the recent economic collapse and consequent currency
devaluation 2 . Nevertheless, the biggest loss that the Lebanese incurred is their brand equity.
A backward reading for Lebanese politics and economy demonstrates that the main enemy for the country is the
governing class itself. This class has in fact conspired against the people they are supposedly responsible for. The
Beirut blast on the 4th of August 2020 revealed the scale of corruption to the Lebanese and the world. The
portion of the Lebanese that has been damaged the most – throughout modern history – is the youth by the ones
who were expected to protect them. The youth have been obstinately stabbed in the back by a class that mastered
the art of political and economic wrongdoing, populist decisions such as the reluctance to pay Eurobond dues
(February 2020), and hindering access to international financing and financial markets. The ruling class not only
deluded people, gave incorrect recommendations, and were behind the collapse; they also lack legitimacy, and

manage to stay in place over several decades through false democracy. They are insolently preaching with
misleading salvaging speeches. The solution provider cannot be the same driver for sheer failure after a track
record of profound damages and no genuine intention for positive change. In modern history, Lebanon competes
with Venezuela on the worst approach and leadership to manage the crisis.

Corrupt politicians and court economists have been claiming integrity and lying to the international community
about their bogus intentions. Those in charge of political and economic policies squandered international grants
and loans (Paris I, Paris II, Paris III), in addition to collected taxes, and confiscation of the deposits of citizens and
expatriates.
For long, Lebanese universities (estimated at more than 35 universities) had an undeniable reputation and were
the backbone for Lebanon, oftentimes praised and recognized internationally. With the decadence of the
educational sector – among other sectors and industries – the youth are realizing that the degrees they hold have
lost their original value. This class owns directly certain universities and controls others; they used these
institutions as a platform to disseminate their ideas and for twisted forms of manipulation and brainwashing. Over
time, this same political class who designed and implemented policies that nurtured needs among the youth, is
now fulfilling those needs by taking advantage and creating dependencies through financial aids and employment
often leading to distorted voting. At the present time, the youth can hardly pursue their studies abroad with de
facto and discretionary capital controls disabling money transfers for education purposes and clipping students’
wings for a brighter future and international exposure. Students outside Lebanon were the only hope and catalyst
for change away from nurturing the inbreeding system.
By the same token, this wrecked country lost its competitive advantage and its Middle Eastern positioning in
banking, hospitality, and healthcare. From a macro-economic standpoint, the gross domestic product could shrink
by as much as 45 percent in 2020. As for unemployment, encompassing underemployment and discouraged
workers, it is expected to surge beyond 60 percent.
The brand of Lebanon, its people, its youth, and forthcoming generations may not be restored. There is an
imminent need to rebrand Lebanon. The youth – who are the present before the future – are left with a substantial
weight: an identity that might be closer to a burden rather than an asset, a reputational issue hindering socio-
professional advancement, and a collateral psychological damage for years and generations to come.
The youth and the Diaspora (estimated at more than three times the size of the population as per Rethinking
Lebanon 3 ) are witnessing diminishing bargaining power in various aspects of life: salary negotiations, access to
rent, professional promotions, and more.
The world used to be fond of the Lebanese for their aura and its connotations to hard work, resilience, prosperity,
creativity, refined taste, arts, and cultural wealth. Today, the world meets a young Lebanese person only to realize
that this smashed nation still has significant value to offer.
The youth have been deprived for very long from accessing leadership and decision-making positions
meritocratically because of wastacracy 4 . Despite every young man and woman’s hard work, wasta seems to secure
the way up the social and professional ladder. Additionally, The Lebanese independent and qualified youth have
been silenced by some incompetent gerontocrats who took the reins of the economy and politics towards utter
breakdown.
The role of the Lebanese youth is of utmost importance. Despite being oppressed and taken hostage by their own
decision makers, they strived to fulfill their duties and responsibilities.

The international community would be collaborating to the crime of the ruling class if supported by any means.
This class isolated Lebanon from the world and can neither be nurtured nor be offered another opportunity to
recreate itself out of the misery it has generated. Any individual or organization whether in Lebanon or abroad
who gives power or defends the corrupt regime is either taking advantage of it or has already done so.
The prevalent political class requires a surgical oncologist who would not only remove the tumor but removes
nearby tissues as well. The youth must lobby internationally leveraging the Diaspora, fellows from global university
alumni, and other driving forces to take charge of politics and the economy. The lobbying must generate a
completely new, decent, competent, and sovereign group to rethink Lebanon, rebrand it, and position it again
competitively on the global and regional map.