Lebanon real estate market: The worst is yet to come 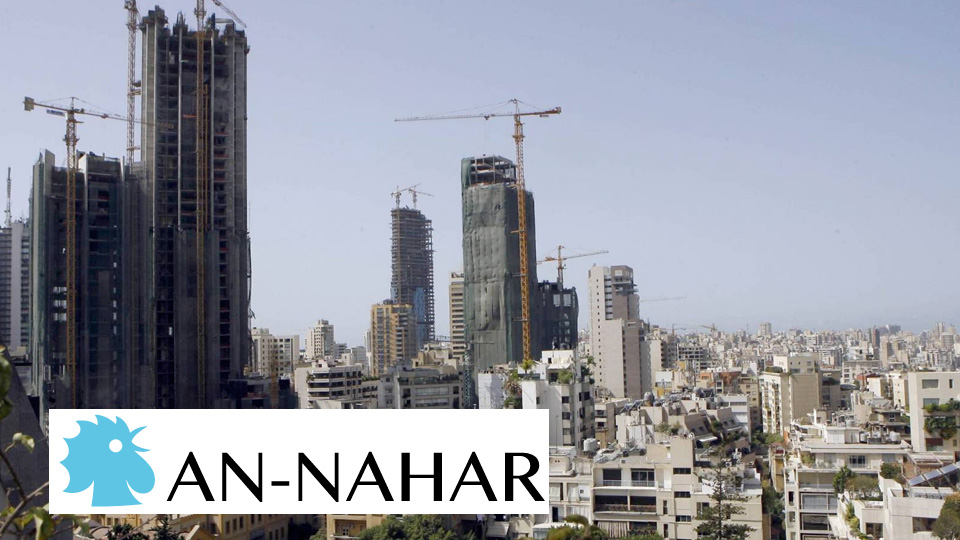 Today, El Hokayem is adamant that if prospective buyers wait for longer, they might snatch three properties for the price of one in 2020.

BEIRUT: In 2016, when the majority of developers and households remained confident, casting aside the possibility of property prices dropping, Chief Financial Market Strategist Jihad El Hokayem went against mainstream analysts and rang alarm bells, predicting a ‘two for the price of one’ free-fall.

Two years on, and El Hokayem is of the belief that the situation is much drier than what he initially thought, telling Annahar that he expects to miss his initial forecast.

El Hokayem’s logic hasn’t wavered since and is based on the most basic economic theory, that the market is oversupplied and demand is shrinking, with all signs pointing towards a downward spiral.

Demand for real estate can be split into three categories: foreign investors, Lebanese expatriates residing in the Gulf and across Africa, and locals.

Foreign demand has been steadily declining in recent years, with investment from wealthy businessmen based in the Gulf almost non-existent today. In fact, demand from Gulf nationals has shifted into the supply column.

The reason being the macroeconomic and political landscape of the country, he says.

Lebanon’s macroeconomic environment ranks 136 out of 138 countries, while its ease of doing business metric comes in at 133 out of 190. Meanwhile, its budget deficit skyrocketed to $4.8 billion in 2018, equivalent to 11 percent of GDP, with the government slow to implement reforms.

“So why would anyone want to invest in Lebanon and not Cyprus, for example?” he asks.

The political turmoil in Lebanon is also another hindering block, with the Syrian refugee crisis taking its toll on the country’s already “anaemic economic performance and crumbling infrastructure.”

Another indicator is the price of crude oil which has similarly taken a hit, not nearly recovering to its 2014 peak of $110 per barrel and valued at an average of $67 in 2018. This has sent ripples across the Gulf and Africa, impacting the spending power of both governments and citizens, with Lebanese expats unable to maintain the flow of remittances into Lebanon, El Hokayem says.

For instance, remittances were valued at $701 million in January 2018, a fraction of the $1.3 billion deposited the same month of last year.

On the local level, El Hokayem questions the wisdom of investing in real estate as things currently stand. He notes that prices are expected to continue to drop, while the rental yield – the income generated as a percentage of the property’s value – is also decreasing given the market imbalance between supply and demand.

“In a state of equilibrium, investing in real estate should give you a higher return than depositing your money in a bank or purchasing bonds, which is not the case now,” he says, before highlighting that investing in Eurobonds yields an average return of 10 percent, while the rental yield currently stands at around 3 percent.

El Hokayem also expects another interest rate hike in the U.S, which will translate into new increases in interest rates in Lebanon given “our dollarized economy, making investing in real estate even less appealing.”

Figures released by the Ministry of Finance show that real estate transactions decreased by 21 percent in the first five months of 2018, with 22,707 properties exchanging hands compared to 28,768 during the same period of 2017.

How did Lebanon find itself in this predicament?

El Hokayem lays the blame at the mismanagement of the crisis, by policymakers with “ostensibly laudable intentions implementing measures that actually aggravated the situation.”

Witnessing the real estate market stagnating, with developers scrambling to find buyers, billions of dollars have been injected for subsidized housing loans of up to LBP 800 million for a single apartment, with a “significant share being handed out to affluent individuals who did not need this help, leaving minimal funds for people who were really in need.”

This prompted developers to buckle down even further on their stance instead of “adjusting prices to meet the purchasing power of those they were targeting.”

In March, another $500 million was injected for subsidized housing loans to support limited-income-families – who mostly acquired small apartments outside Beirut – after banks stopped providing housing loans at subsidized rates, arguing that funds for this type of loans had been depleted. The funds then ran out in just one month.

This artificial median of real estate prices was unsustainable, Hokayem explains, after “Banque Du Liban found itself short of U.S dollars to finance the twin deficit, and stuck between a rock and a hard place; either to support the real estate market or support the Lira peg.”

Millennials aging into homeownership now find themselves priced out of the market, with wages stagnating and youth unemployment “estimated at 37 percent”, much higher than unemployment in the U.S at the height of the Great Depression of 1929.

This, coupled with “the tax hike implemented by the Lebanese government in 2017 to fund a public wage increase,” will further clamp down on the already low demand for real estate in Lebanon.

The spiral could have been avoided, maintains El Hokayem, “if developers acknowledged the truth and adjusted their prices, sold their inventory at lower prices, and deposited the funds in the bank.”

Instead of holding on to a $500,000 price tag in 2016, for instance, El Hokayem notes that developers would have profited even more if they adjusted the price to $350,000 – meeting the purchasing power of consumers – and deposited that amount at an interest rate of eight percent over eight years, “which would have been the equivalent to selling it at $648,000 today.”

But there is a silver lining, says El Hokayem, and that is the amount of money Lebanese youth, first-time buyers, and young families managed to save by waiting before purchasing a property, no matter its value.

Real estate prices are expected to drop by another 15 percent by 2020 with drastic reforms needed to be implemented to pull the market out of its slump, says El Hokayem, calling on BDL to “stop encouraging the rentier economy.”

The rentier economic model has stifled the spirit of entrepreneurship and the desire to invest in Lebanon, he says, diminishing the ability of the private sector to create job opportunities.

“This economic model incentivizes individuals to buy properties hoping for a price increase, or simply deposit their money in a bank while accumulating interest.”

These quick-payback investments of the last decade and financial speculations came at the expense of productive investments in promising, high-value investments across the board, be it in the industrial, agricultural, or knowledge-based sector, El Hokayem explains.

To stimulate growth, attract foreign investment, and create decent paying jobs, which then translates into a higher demand for real estate, El Hokayem expects a change in the country’s fiscal policy.

“They should put forth tax incentives to attract foreign investment as well as investment at the local level,” he says, adding that this would limit volatile and unstable patterns of growth while rejuvenating the appeal of real estate.

Failing to take corrective action would exacerbate the crisis, Hokayem notes, pointing to another worrying trend.

These concerns are fueled as Lebanese buyers who purchased a property through an installment plan, begin to realize that their investment value is gradually dropping, prompting them to ponder the possibility of relinquishing ownership of the property only to buy it later at a lower price.

“It feels a lot like the subprime mortgage crisis of 2008, but on steroids, due to the lack of transparency.”

Jihad El Hokayem is an MBA lecturer at Université Saint-Joseph in Oil & Gas Exploration and Production and Management Programs in partnership with IFP & TOTAL, as well as an EMBA lecturer in Real estate Investment Strategy at the Lebanese American University.